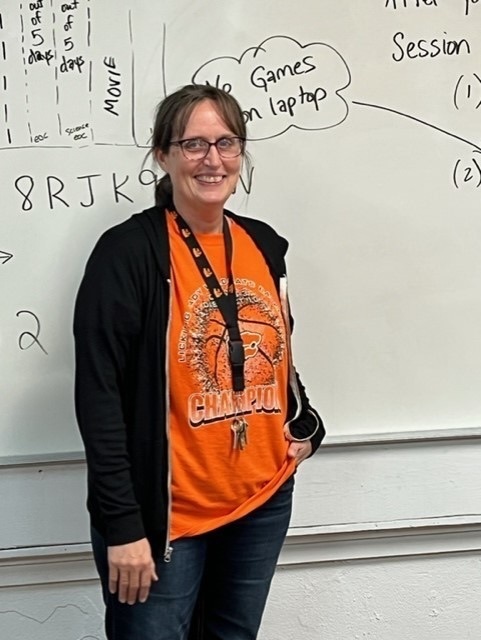 Mrs. Patti Roberts always knew she wanted to be a teacher and a coach. A diligent student herself, Mrs. Roberts considered teaching English or Math while she was in her early grades. Always athletic, Mrs. Roberts found her instinct to challenge herself to perform to the best of her ability to pay off on the court, as well. As an employee for Licking R-VIII School District, Mrs. Roberts is known to offer helpful assistance to any of her colleagues whenever a need may arise. At the end of this school year, Mrs. Roberts will retire as a full time classroom teacher. We are proud to celebrate 26 years of teaching experience with Mrs. Roberts as March Spotlight Staff Member!

Patti Roberts grew up in Houston, Missouri, where she was recognized as the school’s all-time leading basketball scorer and a 1991 high school graduate. Mrs. Roberts went on to attend University of Missouri – Rolla to earn her bachelor’s degree and the honor Magna Cum Laude. The youngest of five children, Mrs. Roberts was the baby of the family raised primarily by a hardworking and selfless mother, Doris Wright. Mrs. Roberts accepted a teaching job in Newburg where she met her husband, Jamie. Mr. Roberts was teaching and coaching at Newburg, and the two fell in love. Together, they traveled between Richland and Newburg where the two worked for sixteen years. They returned with their children, Emily and Gracey, to Houston about 7 years ago to settle in Bucyrus.

Mrs. Roberts gives credit for her work ethic to her mother. Aside from the demands of full time teaching, Mrs. Roberts has served as assistant basketball coach, JV volleyball coach, and junior high girls’ basketball coach adding countless hours to her work schedule. While her daughters were young, Mrs. Roberts took a break from coaching, but that time away from athletics didn’t last long. In 2011, Mrs. Roberts faced a significant fight with cancer in her sinuses. With stage 4 carcinoma that had to be removed in order for Mrs. Roberts to have a chance at survival, Mrs. Roberts underwent major head surgery to remove tumors below her brain. Radiation and chemotherapy followed, and recovery lasted several months. Mrs. Roberts reflected on the experience saying, “During that time, the staff at Richland School District were so good to my family and me. I never missed a paycheck, and many of our school and church friends helped us with meals, our children, and my absence from work.” To this day, Mr. and Mrs. Roberts consider Richland their home due to their lifelong connections with community members.

Over her 26 year career, many changes have occurred in the teaching profession. “There is more emphasis on state testing now than there used to be,” Mrs. Roberts commented. “We used to be able to offer more hands on learning activities in the classroom and students could learn at their own pace. Now, we are really driven by benchmarks according to state standards and the annual assessments.” Overall, Mrs. Roberts recognized that many aspects of public education with secondary students remain very similar to the time she first started as a teacher. “For a time, there was more emphasis on four-year college education as the primary post-secondary plan. Now, I’m really happy that we recognize that there are lots of great careers students can plan and prepare for without having to go into tremendous debt,” said Mrs. Roberts. “At the end of the day, young people are still young people. Some are very driven, some need a nudge of motivation, and some lack the drive to stay focused,” said Mrs. Roberts.

Mrs. Roberts works hard with students mastering problem solving, critical thinking, and difficult mathematics concepts. A fan of puzzles herself, Mrs. Roberts spends many hours outside of the school day preparing her teaching lessons and making sure everything is arranged prior to students walking into the classroom. “I set high expectations for myself,” noted Mrs. Roberts. The staff at Licking recognize Mrs. Roberts’ hard work and benefit from her willingness to use her energy to help others, as well.

When considering her own version of retired life, Mrs. Roberts believes she will stay busy…for at least another five years or so. She says she is open to anything that may enter her path, and Mrs. Roberts is considering working in a field related to teaching a bit longer. Mrs. Roberts enjoys watching movies, binge-watching television series, reading, exercising, and walking on her country dirt road.

Mrs. Roberts is proud mother of Emily, now 21, and Gracey, age 18. Emily is a student at Missouri State – West Plains and plans to student teach in the fall of 2024. Gracey will graduate this year from Licking High School and plans to attend Salem School of Cosmetology after high school. The Roberts family has four dogs – Riley, Smokey, Dolly, and Bear. Mrs. Roberts treasures time spent with her family and celebrating her faith. Mrs. Roberts is a steady, dependable, and caring teacher recognized by students and staff as tirelessly giving her herself to help others. The communities of Licking, Richland, Newburg, and Houston have been blessed with Mrs. Roberts’ influence, and we are proud to feature her as Spotlight Staff Member!